10 Style Facts That Will Shock You | Men’s Fashion Trivia

Chances are you would’ve worn dresses?

You and other boys, age 6 and under…

Well, it’s a fact,and proven facts don’t change no matter how we react to them.

That’s one of many interesting, mind-boggling facts about style & fashion throughout history.

Note: I’m not pushing an agenda in favor of grown men wearing dresses, or makeup, or tons of jewelry.

All these style facts are for entertainment only.

Style Fact #1 – Men Were The Primary Users Of Makeup

That’s right. Makeup – the stuff most guys outside of show business would be mocked for using – played an important role in of men’s lifestyles in ancient cultures.

It all dates back to 10,000 years ago. Tribal men would wear paint either for camouflage (to catch animals while hunting) or for battle (to instill fear in their enemies). There was no aspect of “beautifying” oneself. It was purely functional.

Later, in around 4000 BC, Egyptian kings and pharaohs wore heavy eye makeup. King Tutankhamen and the men during his reign used a green shade, since they believed green invoked the sun and sky gods.

The Japanese and Chinese men in 3000 BC wore nail polish to signify their higher social status. The ingredients they used included eggs, gelatin, and gum arabic. You could say they were quite ingenious. Even more extreme? The Romans painted the tops of their heads (not just their faces) to conceal premature baldness. They’d also powder up their faces to lighten their complexions. It made sense because those men needed to make sure they looked one step above the average person. Image was everything. Sound familiar? 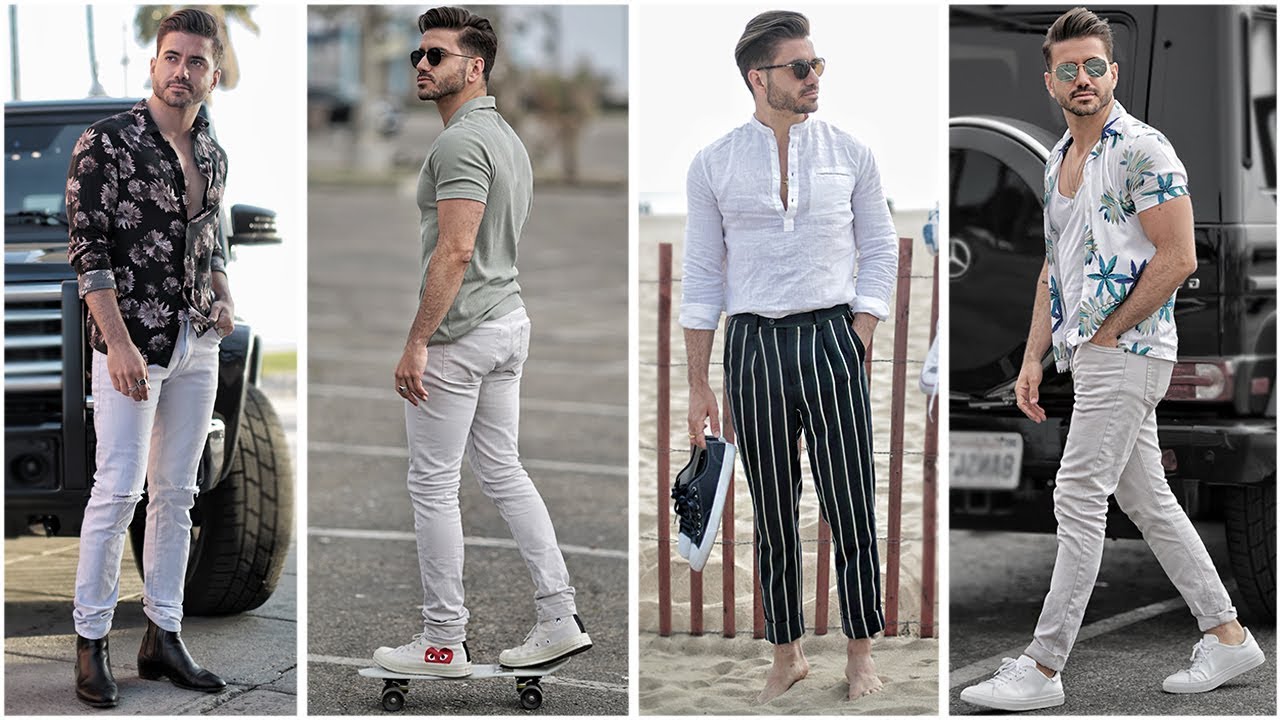 We have it so easy now compared to the men 100-200 years ago. They put their lives on the line…even if they simply wanted to shave or wear a neat collar.

Why? People didn’t know yet how to deal with shaving cuts. Infections eventually led to deaths. That was the case of Henry David’s brother John Thoreau, who died from lockjaw after cutting himself in 1841.

It was the same fate for Lord Carnarvon (who was famous for stepping into King Tut’s burial chamber) in 1923. Can you imagine? Their lives ended abruptly thanks to a practice that men can do safely nowadays.

Then there was the stiff, detachable collar with 2-3 buttons. It became a massive trend when it was invented in the 19th-century. Men had it on as a fashion accessory for gentleman’s clubs. It was cost-efficient since they wouldn’t need to change shirts every day.

The big problem? This collar was starched to a stiffness that affected one’s circulation. It was worn so tightly around the neck…literally choking those men to death. That’s why it was nicknamed the “father killer.”

If you went to the park and saw a rose sticking out of a bush, would you touch and admire it? No? What if you knew that Alexander the Great or Julius Ceasar would’ve done that today?

Those men were real fans of flowers. Alexander the Great would grow his own roses and have them introduced to the countries he conquered. Who knows how often he got his fingers pricked after touching a brand new rose from his gardens?

Those were the times when flowers were symbols of beauty or “life and its fragility.” The Romans used them (particularly roses) for religious ceremonies. And people generally thought that smelling flowers would help you become closer to the gods.

Flowers are definitely manly, as history shows. So don’t be afraid to incorporate floral patterns in your shirt, tie or pocket square. Don’t look down on the idea of wearing boutonnieres. That’s kind of like insulting the great rulers of ancient history.

Speaking of flowers, are you planning to send flowers for that special someone for Valentine’s Day? In case you forgot, it’s just one week away! But why go through the hassle of dropping by local shops (which have all probably sold out by now)? Or what if their stuff is overpriced?

Thankfully, there’s an easier way to do this. Order online from 1-800-Flowers and you won’t have to worry about a thing. This great company handles everything from packaging to delivery. Try their service and just add the required info. No stress whatsoever.

History doesn’t lie. It wasn’t too long ago when pink was considered a masculine color. It was seen as a “diminutive” of red, which already had strong associations with war.

Men back in the 18th century not only wore pink, but dressed in pink silk suits which were embroidered with flowers. Those men were very powerful and highly respected.

In the early 1900s, young men would confidently sport pink dress shirts (the first of which was made by Brooks Brothers) as part of their Ivy League wardrobe. So what caused such a dramatic shift in perception?

Blame it on companies in the 1960s that introduced gender-specific baby clothes, assigning blue for males and pink for females. That forced parents to buy new clothes for their second child if it was a boy and their first was a girl. Shortly after, the pink-is-for-girls trend started.

Style Fact #5 – Men Were The Primary Wearers Of Jewelry

Throughout history, men have worn many of the same types of jewelry that women wear today. It was particularly common during the Renaissance era, when wearing jewels signaled wealth and power.

Men’s jewelry included not just gold, but gems, rubies, pearls, and other stones in their outfit. Kings would drape pearls around their necks. They dressed in purple since that color was labor-intensive and symbolized royalty. Earrings were also quite fashionable.

Henry VIII was one notable jewel wearer. He was depicted in Hans Holbein’s famous portrait of him wearing a sparkling, jewel-filled necklace. There were rubies lined up at the front of his robe and several rings on his hands. It’s too bad Prince William wouldn’t get away with that style now.

Here’s a thought. Wouldn’t dresses be easier than trousers if you always had to pee? If you couldn’t always time your pee breaks like back when you were little?

This is why boys from a century ago wore dresses just like girls until they were 6-7 years old. That was also the age when they got their first haircut.

The dresses were white (since white cotton could be bleached) and came together with diapers for children when they were still small. They were totally gender-neutral, making nature’s call much easier for kids and their parents.

Did you know that ancient Egyptian murals portray nobles and men of authority wearing heeled shoes? The reason was similar to wearing jewelry: to set themselves apart from the lower class, who walked barefoot.

Heels were also worn during ceremonial occasions. But they were most practical for Egyptian butchers as they often needed to walk over bloody carcasses.

When you look at modern-day heels, it’s hard to tell that they were originally made so men could place their feet on stirrups while riding horses. Back then, they looked quite different too. Those heels led to higher heels, which men wore to look taller. Eventually then those incredibly high platform came along which became a surprisingly long-lasting trend. It’s amazing how times have changed.

Avaj (a lifestyle e-tailer in the UK) did a survey of 1,000 people who were asked about their mirror-looking habits. What were the results? Men look at their reflection 23 times a day on average, whereas women do it only 16 times daily!

But here’s the key difference. Women mostly do it to check if anything’s out of place (e.g. no stray hairs or smudges of makeup). Men also check themselves but spend more time admiring their body. The survey reveals men admit to looking at their arms (76%), legs (54%), eyes (43%), and hair (38%). The average spends 10 minutes a day for that, which is nearly 6.5 days per year!

This comes from a study performed by psychologists at Yale and Northeastern University. Clothing affects perceptions of intelligence. By covering up (showing less of your neck and chest, avoiding shorts or sleeveless shirts, etc.) people can focus on your words and thoughts instead of seeing you as an “object.”

That may sound shallow, but that’s reality. Put yourself in this situation: you’re riding a bus to visit a friend but not sure where your stop is. Your seatmate (wearing shorts and a plain white t-shirt) tells you to exit in two stops. Then another man standing in the aisle (well-dressed in office attire) says you should get off at the next stop.

Chances are, you’ll be inclined to follow the second guy’s advice. Why? Because he’s dressed better. You’ll trust him more even though both men are strangers. That reflects the preconceived notions and stereotypes built into our assumptions of others. We can’t help it. Society has made us that way.

Style Fact #10 – Yankee Doodle Is A Song About Fashion

You might’ve known the lyrics since you were a child. But it’s time to stop being naive. Yankee Doodle doesn’t just describe some innocent man riding a pony into town with a feather in his hat. That man represents Americans during the Seven Years’ War and the American Revolution.

The “macaroni” lyric isn’t actually literal. It refers to a British dandy who would travel throughout continental Europe imitating the continental fashions. So the British first composed this song to mock Americans who thought they could be noblemen by just putting a feather in their hat. Ironically, the Yanks loved it. They won the war and have kept the song alive since then.

In case you’re curious on how to dress like a macaroni – you’ll need a huge wig with a tiny hat (or feather) on top plus a flashy waistcoat, fancy buckled shoes, and brightly-colored stockings.